Signs and symptoms of lupus 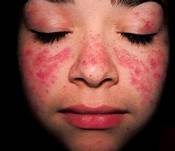 The development of symptoms does not seem to follow any specific pattern. The symptoms of lupus may appear abruptly or gradually. In some cases, it may be mild, and in others, it may be extreme. Some signs are temporary, while others are permanent. People with lupus have a persistent mild illness with frequent flare-ups, which is where the signs and effects become noticeable.

More critically, depending on which area of the body is infected, different signs and symptoms appear. While both sexes suffer the same symptoms, it is women that are most likely to develop this disorder.

The following are some of the most prominent signs and symptoms: